A baby Java mouse-deer, the smallest hoofed animal in the world, was recently born at a zoo in in Spain. The newborn deer weighed 100 grams and was described as "no bigger than a hamster" by staff at the Bioparc Fuengirola in the south of Spain. Adult members of the rarely seen Tragulus javanicus species rarely weigh over a kilo but, despite their name, grow to the size of small rabbits. 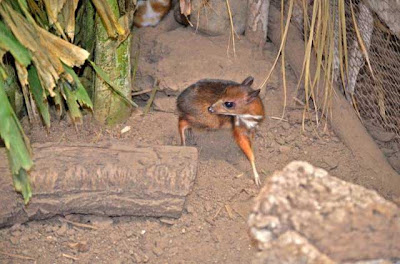 They do, however, have a rodent-like appearance, with large eyes and a small nose. Although they lack antlers, the males possess tusk-like upper canine teeth which they can use to defend themselves. Experts describe the animals as fiercely intelligent, and the species represents wisdom in many local legends. 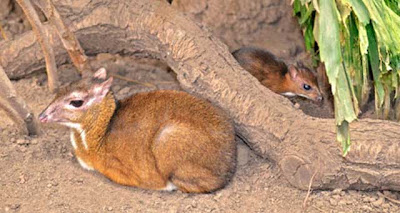 The Southeast Asian animals are nocturnal and very difficult to spot in their natural tropical forest and mangrove habitat where they live near water on a diet of plants. Deforestation and habitat destruction in Java and Bali is known to have affected the population of the species but it is officially classed as 'data deficient'.

The deer are also regularly hunted and trapped to be eaten as a delicacy, as well as for their pelts and for sale as pets. There are only 43 Java mouse-deer in Europe and this is the eighth such animal to be born as part of Fuegirola Bioparc's conservation programme, which has been active since 2006. The baby's mother was also born at the zoo.
Posted by arbroath at 6:05 am
Email ThisBlogThis!Share to TwitterShare to Facebook