The judge did a double-take and there were giggles aplenty in a Florida bond court on Wednesday when a bailiff announced the name of a man arrested for drug possession: Edward Cocaine. "What?" uttered a stunned County Judge John "Jay" Hurley. 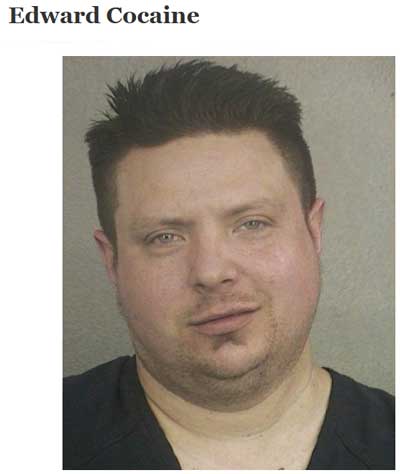 "My last name is Cocaine," proudly stated the man at the podium. His name was indeed legal and inscribed on his driver's licence. "You know, I'd thought I'd seen it all," Hurley laughed, shaking his head. "How many times have the police told you to step out of the car during your life?"

"Just about every time I get pulled over," a chuckling Mr Cocaine admitted. The 34-year-old Fort Lauderdale man, who was arrested on Tuesday for possessing Xanax, explained how he got his name.

"My great-grandparents came over here from Greece and they changed it," he said. "That was like in the 1920s." The judge remained nonplussed. "I'm still trying to absorb this," he said. Judge Hurley released Mr Cocaine on his own recognizance.
Posted by arbroath at 6:05 am
Email ThisBlogThis!Share to TwitterShare to Facebook