University bosses have been forced to erect a fence around a lake to stop a spate of attacks on students  by a racist swan. The 4ft tall bird, which has an 8ft wingspan, has been branded as racist because it only seems to attack foreign students at Warwick University.

The animal, which is currently nesting, has been launching at people as they cross a footbridge over a pond at the university’s Gibbet Hill campus in Coventry, West Midlands. The footbridge is used by hundreds of students everyday wishing to get from their accommodation to their lessons at the university buildings. 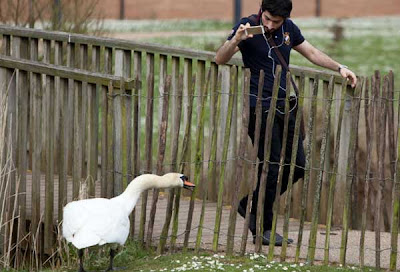 But undergraduates say that the bird only seemed to be targeting students from ethnic minorities. One 24-year-old student from India said: “These swans are very annoying, and the students feel as though they’re being bullied. I’m from India, and they attack me especially, they focus straight on me.

“We’ve been warned that the swans will be a bit feisty at this time of year, but they go for me all year round. I think they don’t like too many Indians in England – maybe the swans here are a little bit racist.” Italian student Albertina Crocetti, 24, said: “It’s bizarre, she doesn’t seem to like foreigners and attacks them. She’s a true right winger that’s for sure – they certainly seem to be racially motivated incidents.”
Posted by arbroath at 6:01 am
Email ThisBlogThis!Share to TwitterShare to Facebook

I remember in 2014 the Rugby Club at Warwick University had a tough time with the planning and schedule (university papers online by essaytyper essaytyper.pro review). One of the reasons was a suspended sentence. So many rugby boys had to attend consent workshops. It was their punishment.

Student accommodation abroad can be a stressful task, thus for students to get over this hustle we have introduced fully furnished and spacious rooms with zero hassle.
True Liverpool