A Florida woman says she caught a neighbour feeding an alligator and yelling at it in a senior living community. "She would bring food back and forth and feed him and he would hang out there all day with her," Lynette Miller said. 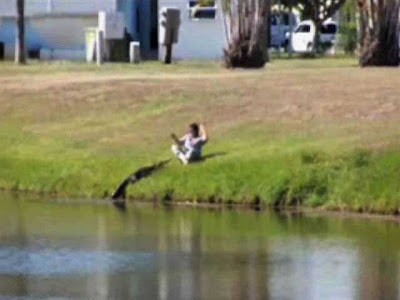 Miller captured video of the woman in Port St. Lucie last year and says she saw her multiple times feeding the gator. "She nicknamed the gator Puppy Puppy. She would yell at him and he would come," Miller said.

Other neighbours also saw the gator. "I would hear 'puppy, puppy, puppy.' I thought the woman was calling for her husband. But she said 'no, I am calling for the alligator,' " Grace LaPlace said. Neighbours say they saw the woman feeding the gator all different kinds of food including cereal.

"She would talk to him in a low voice. If he got aggressive, she would yell at him," Miller said. Crews removed the gator nearly a year ago because it was coming up to other people and trying to take food. "Nobody called the authorities until it came up to a patio and tried to take a steak," Miller added. Neighbours say the woman seen in the video has since moved out of the complex.
Posted by arbroath at 6:07 am
Email ThisBlogThis!Share to TwitterShare to Facebook