A woman who signed an apartment lease with her boyfriend and allegedly agreed to be liable for any smoke or water damage, faces a $2 million lawsuit after he attempted to cook a squirrel and started a massive fire with a blow torch. A lawsuit has been filed in Ottawa County Circuit Court by an insurance company that covered damages after the Oct. 10, 2012 fire at ClearView Apartments in Holland Township, Michigan.

Khek Chanthalavong told investigators the blaze started after he had been using a blow torch on the deck of a unit he shared with Barbara Pellow, to burn the fur off a squirrel he'd captured. Once the fur was removed, he placed the torch in the corner of their deck, next to a plastic plant holder. He then went inside to cook the rodent. 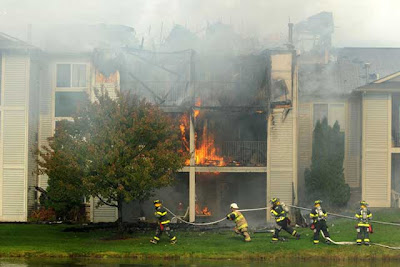 Pellow awoke to Chanthalavong yelling and throwing water on flames that were quickly growing on the deck. The fire spread and caused major damage to 32 units in the couple's building. Pellow told police she had no knowledge of the blow torch being used. Traveler's Indemnity Company insured Clearview and was required to make payments in excess of $2 million for damages, repair and restoration. The insurance company is now suing Pellow for that amount.

She, through her lease, agreed to be responsible for any damages caused by either she or Chanthalavong, the insurance company claims. "Pellow is contractually obligated to Travelers for the full amount of any and all damages from the fire and water damage including the actual costs of repairing or replacing the damaged property as well as any loss of rental income suffered by Clearview related to the fire and water damage," a complaint filed in Ottawa County reads.
Posted by arbroath at 6:06 am
Email ThisBlogThis!Share to TwitterShare to Facebook

Wait. Let me get this straight. The guy caught a squirrel, killed it, burned off the fur with a blow torch, etc. That's enough oddity right there. As the woman moved in with him and signed the acceptance of responsibility for damages, if she pays and gets rid of him, it will be worth the 2 mil.