Housewife Noraslinda Asat was given a shock when she used the toilet in her ground-floor home in Eunosville apartments, Sims Avenue, Singapore. A 1.8m-long python in the toilet bowl bit the 34-year-old on her right thigh when she sat down. Madam Noraslinda said she had just sat down when she heard a soft, bubbling noise and felt pain. She said: "I looked down and I saw a snake." She stood up and tried to grab the snake. But its body was so wide, it kept slipping out of her grip. "So I grabbed the head and pulled it off me. Then I backed out of the toilet and shut the door."

Her four-year-old daughter - Adriana, who had used the toilet five minutes earlier without incident - told Madam Noraslinda: "Mama, your tail was moving." After the shock, Madam Noraslinda felt weak and drowsy. Her husband called an ambulance, which took her to Changi General Hospital, where she was given an injection and discharged. Doctors and nurses praised her bravery. They said "most girls would have fainted". Describing the snake, Madam Noraslinda said: "It was brown, with patches of dark brown. I could tell it was a python. It was really long, I couldn't even see its tail in the toilet bowl." 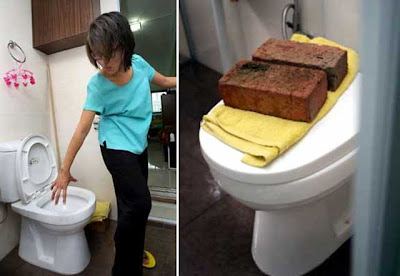 Officers from the Animal Concerns Research and Education Society were called by police to capture the snake. They searched the house but could not find the python, so the officers suspected it had slid back into the toilet bowl. Madam Noraslinda also called her brother's friend, a pest controller, for help. He arrived and checked the manhole outside the unit. "I opened it and the snake's head was there," he said. "The python looked tired and scared," said the pest controller, who declined to be named. "I managed to grab part of its tail, but it slipped out of my grip and disappeared into a crack."

Madam Noraslinda's mother, Madam Fatimah Bee, 66, said she, too, had seen a snake in their common toilet. This was two weeks before Madam Noraslinda was bitten. "I thought I saw a snake's head going back inside the toilet bowl," she said. Following that sighting, Madam Fatimah poured pots of hot water down the toilet bowl, put the lid down and put bricks on top. Mr Fitri has also been pouring hot water, sometimes with bleach, into both toilet bowls. Madam Noraslinda now has a phobia about using either of her home's two toilets. She is so traumatised that she has been using toilets at petrol kiosks, coffee shops and other public areas. "I still feel very scared, because the snake has not been caught," she said.
Posted by arbroath at 6:02 am
Email ThisBlogThis!Share to TwitterShare to Facebook