A Florida man, who back in 2012 claimed he was a DEA/CIA agent in order to get free doughnuts, was arrested in Vero Beach earlier this month after reports that he tried to enter a pharmacy with a brown paper bag over his head. 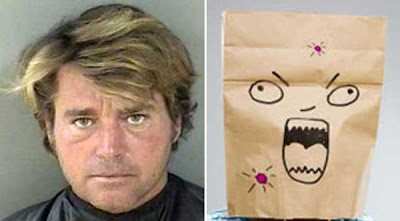 An Indian River County Sheriff’s deputy said that at about 11:45pm on June 9 she went to a CVS pharmacy following a “suspicious incident.” A woman told the deputy that Clayton Schwey, 38, tried to enter the store with a brown paper bag over his head.

“This was scaring customers and they told her that they thought she was about to be robbed,” the affidavit states. Attempts to get Schwey to leave weren’t successful. “He did remove the bag from his head and re-enter the store and cussed at the complainant and stated that this was a free country,” the affidavit adds.

Schwey then walked toward the cooler area. When the deputy arrived, Schwey was sitting on the sidewalk with the brown paper bag next to him. Schwey, listed as homeless, was arrested on charges including wearing mask, hood, or other device on property of another and trespassing.
Posted by arbroath at 6:07 am
Email ThisBlogThis!Share to TwitterShare to Facebook