'The Scream' appears in tree stump

"I felt as though a vast, endless scream passed through nature,” the painter Edvard Munch famously wrote. But he probably didn't mean it quite as literally as this.

"I was just having a walk along the river (Mesna) and I just happened to stumble over this stump," Kjell Marius Mathisen, who works with cultural heritage for Oppland county council in Lillehammer, Norway, said. 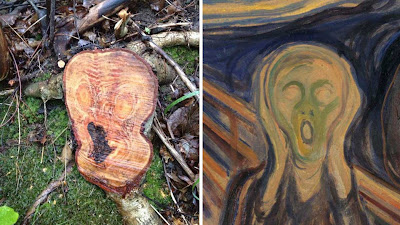 Despite Munch's poem, Mathisen said he believed the appearance of a near perfect replica of the famous painting 'The Scream' in nature was "just a coincidence".

"This is the most famous and recognisable piece of art probably in the world, so there's a lot of people who recognise the motif," Mathisen added.
Posted by arbroath at 6:01 am
Email ThisBlogThis!Share to TwitterShare to Facebook

Had that been America, they would have seen Jesus.

I was just going to say something to that effect.