There will be no putting Humpty Dumpty back together again after he literally fell off a wall and smashed into pieces at the Enchanted Forest in Salem, Oregon, on Saturday. 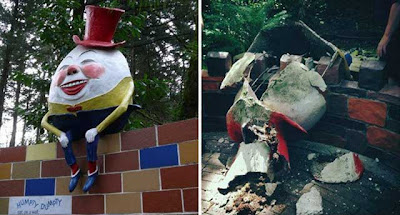 It appears Humpty’s demise was accidental. Two men had climbed over the retaining wall and tried to get up on the wall with Humpty, but Humpty and the wall fell.

Made of cement, Humpty Dumpty was made by artist Roger Tofte and had sat on that wall since the park opened in 1970. Now 84, Tofte will try to make another one.

“It’s going to take a few hours to start from scratch again,” Tofte said. The two men who knocked Humpty off the wall have offered to pay for his repairs.
Posted by arbroath at 6:03 am
Email ThisBlogThis!Share to TwitterShare to Facebook