A man is attempting to push a Brussel sprout up Mount Snowdon with his nose. Stuart Kettell, from Balsall Common in the West Midlands, set off at 7am on Wednesday and hopes to reach the 1,085m (3,560ft) summit in four days. 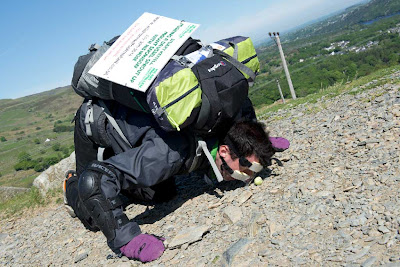 The 49-year-old, who wants to raise at least £5,000 for Macmillan Cancer Support, will replace the sprouts as they fall apart. It is his latest in a series of fundraising challenges, which have so far raised more than £40,000 for the charity.

Mr Kettell has been training for the event by pushing a sprout around his garden and also had a half-mile trial run on the mountain. The trial run showed that he could cover just one tenth of a mile in 50 minutes.

Cameraman Richard Crump, who is filming Mr Kettell's challenge, said: "The first day has been gruelling for Stuart. He has no skin on his knees, his back is hurting and his neck is really tired. But he is still going."