A two-timing cat in New Zealand has prompted a tug-of-war, with two families laying claim to their beloved pet. The straying feline, known as Ming to the Alexander family and Cleo to the Smith family, has been playing away for nearly 10 years, living a secret life with each family. It all started when Alice Alexander bought a pedigree Siamese cat, which she named Ming, in 2000. He had a habit of mingling, thus the name and he once took a nap in a removal truck and ended up in the eastern suburbs of Wellington, before being discovered. 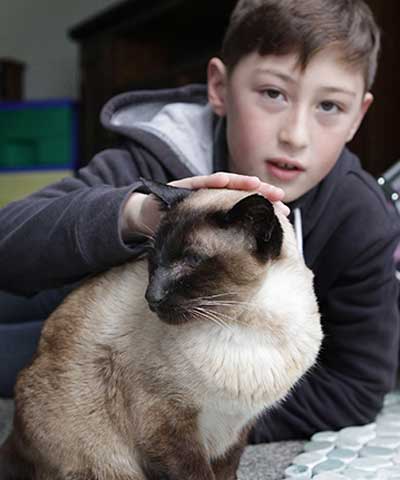 "Everyone knew Ming and I would often get calls saying he was in someone's house." When the family moved to Strathmore in 2005, Ming would go wandering, often returning home not hungry and without his collar, which had his name and the Alexanders' phone number. The wandering became more frequent, then in 2010 Ming disappeared. Alexander put missing cat posters up around her neighbourhood, but no-one had seen Ming. In May this year, she was shocked when he "just appeared out of nowhere" after four years. Alexander had been sitting on her deck when a cat climbed onto the glasshouse roof and began meowing.

"I picked it up and realised it was Ming. I was running scenarios through my head, wondering where he had been." She got Ming microchipped and put on another collar, but the cat disappeared again. A month later, he returned with a shaved leg and had obviously been to the vet, Alexander said. "I knew then that someone had him so I put up more missing cat posters and one week later, a lady got in touch to let me know Ming was living with them." It transpired Ming was living a double life as Cleo in the Smith family home, which was next door and down the hill. The Smiths had moved to Karori, but when they shifted to Auckland, they took Ming, who had been Cleo for five years, with them. 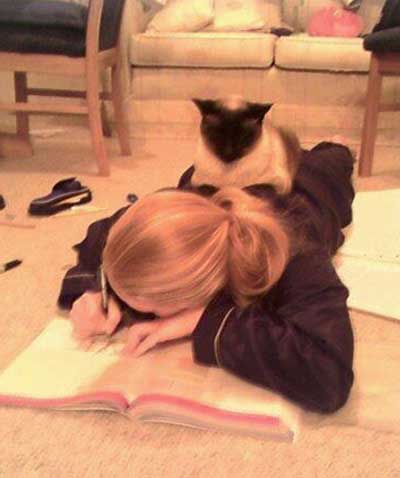 They moved back to their Strathmore home earlier this year. Glenda Smith said that until she saw the posters, she had no idea about her cat's "secret life." Cleo had been her husband's cat before they got married. The cat spent so much time at his house, he assumed it had been a stray so took it in and did not steal it, she said. "Cleo is part of the family and been with us for nine years, we can't just push him away now. It's emotional for us too, he loves us and always come back." The fate of Ming/Cleo has yet to be decided but both women say that they just want the cat to be happy. "It's so difficult, we love him so much and want him to be happy but worried the family will move. Ming is 15 years old now and deserves to retire. He shouldn't have to try and reclaim territory," Alexander said. She had contacted the SPCA and police who told her they were unable to help.
Posted by arbroath at 6:04 am
Email ThisBlogThis!Share to TwitterShare to Facebook

Okay, I can buy most of that, except for the missing collars. Unless they were breakaway collars, someone would have had to have removed the cat's collar on those instances where it returned to its original home without it.

Obviously a siamese cat would not be wild. The smith family selfishly stole him. Its to old now to fight over the Alexanders ought to let him go buy another siamese or a cheaper one the smiths wont bother stealing.