A Bedfordshire pub which put up a sign offering to nail people's unruly children to their table has defended it as "just a bit of fun". The sign was put up by Nikki Brodin at the Black Lion in Leighton Buzzard, who said she did not want screaming children running round.

It suggests staff would "happily nail it [your child] to your table... to avoid accident or injury" to the child. Miss Brodin said the sign was not intended to offend. She said the pub welcomed children but wanted people to "talk and socialise and not have children running around screaming". 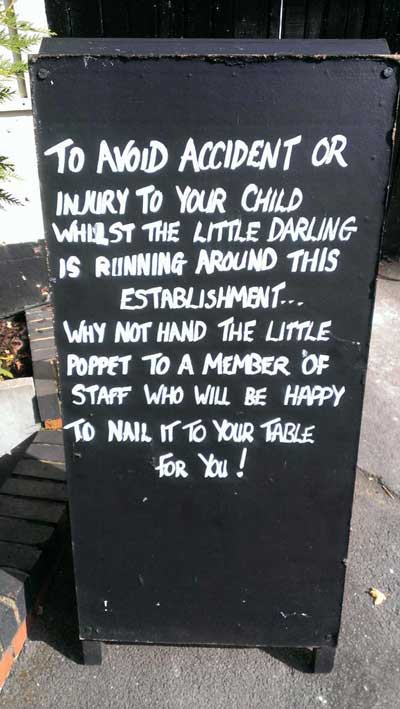 The pub does not serve food, nor does it have music or a television. Instead it encourages customers to talk to each other over board games. "We certainly didn't want to ban kids, we just believe in traditional values. It's just a bit of fun," Miss Brodin said. "It's not to offend anybody - we have children ourselves."

Debbie Bird, family editor at Babyworld.co.uk, said while she recognised the sign was "tongue-in-cheek" some of the wording was "a little bit aggressive". She said it was important that children were "exposed to social events" such as going out to pubs and eating in restaurants. "They won't learn unless you give them a chance," she said.
Posted by arbroath at 6:00 am
Email ThisBlogThis!Share to TwitterShare to Facebook

Well donr to the pub for explaining to selfish parents in words that they will understand that letting their offspring run riot is not acceptable.