Sheep farmer proposed to girlfriend with help from his flock

A resourceful sheep farmer from Willingdon in East Sussex found an interesting way to propose to his girlfriend. Henry Brown, 34, surprised his girlfriend Emily Walker, 22, from Hailsham, by proposing with a helping hand from his flock. “We both work in the sheep farming sector, it felt an apt way to propose,” said Henry, who farms 450 lambing ewes. 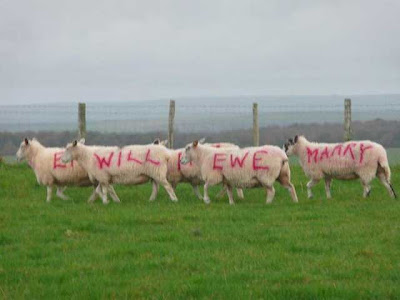 “You’ve got to make a bit of effort with these things, you only do it the once. I just thought I would make it a bit of fun really.” He said he planned the proposal in advance, and wanted to make sure it was imaginative. “We both had the day off so I said shall we go for a ride around the farm,” said Henry.

Earlier, he had got five of his flock, sprayed them with ‘Emily, will ewe marry me?’, and put them out in a separate field. When the pair spotted the sheep in the wrong place on their morning ride, they went out to investigate. Emily said, “I did not have a clue, I did not expect it at all. 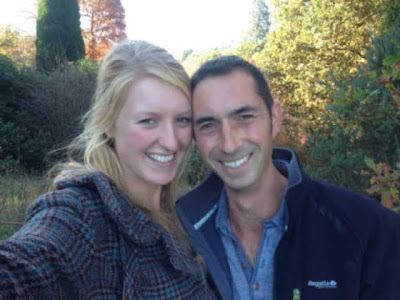 “I was really surprised. I walked up and saw the sheep and thought hold on what’s going on. Then I realised what they had got written on them. He then did the gentlemanly thing and got down on one knee.” Emily said yes, and now the pair, who have been together since May, have set the wedding date for June 27 next year.
Posted by arbroath at 6:01 am
Email ThisBlogThis!Share to TwitterShare to Facebook