A 19-year-old Florida woman was arrested early on Sunday morning for domestic battery after allegedly striking her live-in boyfriend in the eye with a box of condoms. According to police reports, Dominique Claridge and William Hessian, 19, got into a verbal argument that turned physical at around midnight. 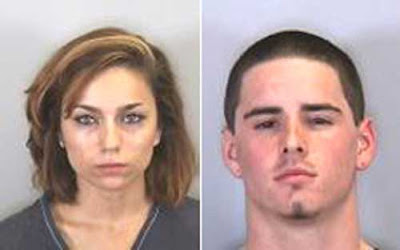 The squabble took place inside a car being driven by Hessian near the couple’s Bradenton home. Claridge told officers that the pair argued about Hessian “talking to some other girl.” At one point, Claridge threw a box of condoms at Hessian, striking him in the left eye. The alleged prophylactic attack left Hessian with “minor bruising to the eye area,” police noted.

Investigators did not describe the size of the condom box that struck Hessian, who works as a welder. Claridge is a waitress at Tijuana Flats, a Mexican restaurant in Bradenton. While Claridge admitted to flinging the condoms at Hessian, she claimed it was in retaliation for him slapping her in the face.

She also claimed that Hessian tried to pull her out of the vehicle. Hessian told deputies that Claridge also punched him several times. Since deputies could not determine the primary aggressor in the confrontation, Claridge and Hessian were both arrested for misdemeanor domestic battery and briefly booked into the county jail. The couple are scheduled for a January 29 court appearance.
Posted by arbroath at 6:05 am
Email ThisBlogThis!Share to TwitterShare to Facebook