Couple released after being trapped for two days in unlocked closet

A man and a woman thought they were trapped in a Florida closet for two days until police let them out on Tuesday – and found out the two could have opened the door themselves. 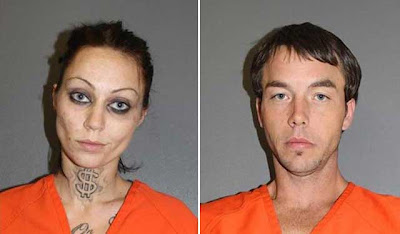 Arwood and Campbell were charged with trespassing. Campbell was also charged with violating her probation, which she was given after resisting arrest in 2013. Arwood's criminal record includes five prior jail sentences in Florida since 2000 for offences including armed burglary, possession of more than 20 grams of marijuana, and fleeing law enforcement.

Officers tracked his phone's location and let him and Campbell out. It's unclear why Arwood didn't call 911 until Tuesday. A police officer, trying to figure out how the two could have got locked in, went into the closet and closed the door, police said. The door did not lock. Officers did not find drugs in the closet, police said.
Posted by arbroath at 6:05 am
Email ThisBlogThis!Share to TwitterShare to Facebook

As soon as I read the headline, I knew it involved drugs.

As soon as I read the headline, I knew it involved Florida.

I almost went to that college...

Heck, just looking at them you could tell it was drugs. The neck tattoo tells you it was A LOT of drugs.