Distracted driving was responsible for a miles-long traffic jam on I-20/59 East near Tuscaloosa, Alabama, on Sunday night and Monday morning. The driver was trying to pull his own tooth, according to an ALEA State Trooper report.

The accident, which happened just before 10:30pm, was caused when a self-employed tractor trailer driver took his hands off the wheel to pull a loose tooth from his mouth. "The driver stated he lost control when he was pulling a tooth with his hands," the report reads. 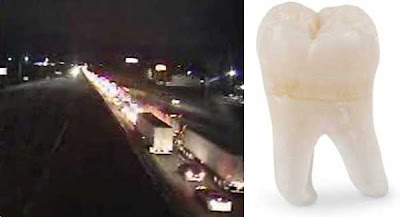 "He had the tooth in his shirt pocket as proof." The truck left the roadway, travelled down the slope leading into a ditch then jack-knifed into nearby trees, according to the report.

No one was seriously hurt, but the effort to recover the truck caused road crews to set up a detour and completely divert eastbound traffic off the interstate for several hours. The 57-year-old driver's name was redacted from the State Trooper's report.
Posted by arbroath at 6:06 am
Email ThisBlogThis!Share to TwitterShare to Facebook