A French baker fell foul of the law for keeping his boulangerie open seven days a week - one day too many according to the rules.

Baker Stéphane Cazenave, who has a boulangerie in the town of Saint-Paul-les-Dax, south-western France, holds the 2014 title of "best baguette in France". But local residents won't be tasting his baked treats on Mondays anymore after officials stepped in. 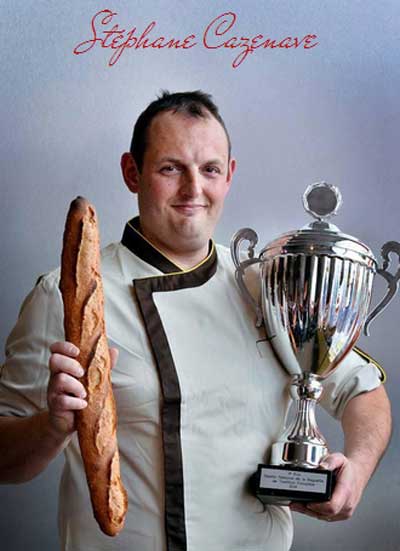 This is because the bakery was twice found to have been open for seven days in a row without a break of at least 24 hours - which according to French law isn't allowed for any shop that sells bread.

Cazenave said that having to shut up shop for one day a week would mean a loss of €250,000, which would see his 22 employees hit hardest. He has said that he won't be able to keep all of them on the payroll. "People see me like a thug just because I asked to work," he added. "Working shouldn't be a crime in France."
Posted by arbroath at 6:02 am
Email ThisBlogThis!Share to TwitterShare to Facebook

Does anybody know what is the reasoning behind this?

I imagine it's just one of those strange archaic laws.

Britain has a lot of them.

Maybe its because bakers have to work through the night to get the fresh bread on the shelves in the morning?
Doing that 7 days a week plus running the shop doesn't give anyone time to get proper rest

I doubt it's for any consideration for the bakers. It's probably left over from the keep the Sabbath day holy days.

I suspect Barbwire's explanation is closer to the truth, Annemarie.

I'm not sure that politicians who make the laws care one jot about people's working conditions or arrangements.

Update: It appears you were right, Annemarie. :)

Eric Scherrer from the retail trade union CLIC-P, says that French laws must be respected and that they are not complicated.

“Firstly if laws are not respected then they are no longer laws. It’s not just in France that it works like that," Scherrer says. "Do I have the right to go out and drive at 300km per hour because I don’t want to respect the law? Where do we stop?

“There is a rule in place that says bakers and other professions in the food industry must close for at least one day a week. It’s because it’s an artisanal trade where people can work a lot, much more than the legal limits," he adds.

“These people need to have a rest day each week. We can’t just allow them to work non-stop. It’s absolutely necessary that both bosses and employees have a day of rest."

The union chief stresses that the regulations were made up by professionals and tradesmen, not bureaucrats in an office in Paris.

ooh well, a brownie point for me :)

Of course, a more reasonable regulation would be to allow the business to remain open 7 days a week, but limit any one person to working only six days in a row.

Actually, the most reasonable legislation would be to simply not legislate on the subject at all.

"We can’t just allow them to work non-stop."

Who's the 'we' here? Why does that 'we' get any say in how a business owner wants to organize?

"The union chief stresses that the regulations were made up by professionals and tradesmen, not bureaucrats in an office in Paris."

If that were the case - then what was stopping these people from simply not working? Why did they need a law to force them to do what they wanted to do anyway?

Keeping the shop open 7 days doesn't require any one person to work all 7 of those days.

This is a stupid law.

It's unfair to care after boulangeries only. What about workers other industries?
"We can’t just allow them (say water and electric supply companies) to work non-stop." They have to break at least 24 hours weekly as well.