Zookeepers who purchased five baby rabbits from a local market say they are baffled as to why one of them prefers to walk around on its front legs. The rabbits were actually purchased as food for some of the other inhabitants at the zoo in the city of Liuzhou in southern China’s Guangxi Zhuang Autonomous Region, including a giant python that only eats live food. 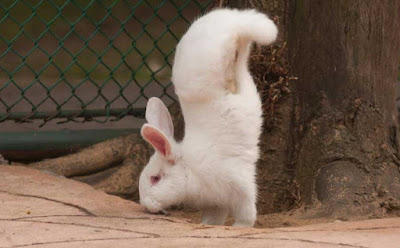 But after the rabbit with its bizarre trick of walking on its front legs ended up proving more popular than the other animals at the zoo, it was given a stay of execution. Zoo spokesman Xiong Shao said: "We thought that perhaps the rabbit had damaged its back legs, but when it isn't walking on its hind legs the two back legs seemed to work perfectly. 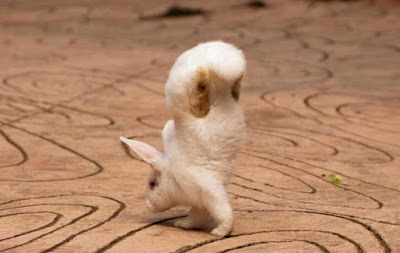 "It doesn't seem to be in any pain so there is no reason for it to walk like this, it can't be easy. We are completely baffled as it was too young really to have been taught any tricks, and whoever heard of teaching rabbits to walk on their front legs?" They said that the rabbit had only been two-months-old when it was bought last October, but almost as soon as it arrived had started doing the front leg stunt.

The spokesman added: "We have been amazed by the visitor numbers that have increased thanks to the rabbit, it is our new star even if we really don't know why." It has been suggested by other people that some type of a congenital disorder might be the reason the rabbit prefers to walk on its front legs.
Posted by arbroath at 6:03 am
Email ThisBlogThis!Share to TwitterShare to Facebook