When David Eli Lingafelter was arrested on Wednesday for the robbery of a Subway restaurant in Olympia, Washington, he was carrying a white canvas bag with a handwritten dollar sign on it.

The bag was tied to the front of Lingafelter’s trousers when police caught the 20-year-old shortly after the sandwich shop heist.Police allege that Lingafelter entered the Subway wearing a white hat and a red bandana over his face, adding that he “reached into his pocket as if he had a weapon.” 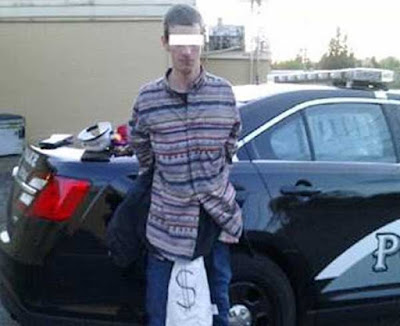 After directing a female employee to open the cash register and place her hands on her head, Lingafelter swiped $100 and the worker’s cell phone. While committing the robbery, Lingafelter warned the Subway employee not to “do anything funny,” police reported. Lingafelter was later apprehended hiding behind a dumpster at a nearby shopping centre.

A police search of the suspect turned up a knife, $100 in cash, and a phone matching the description of the one stolen from the Subway worker. Additionally, investigators noted, Lingafelter “also had a white canvas bag tied to the front of his pants that had a dollar sign printed on it.” Lingafelter was booked on robbery and obstruction charges. He is being held in the Thurston County jail in lieu of $10,000 bond.
Posted by arbroath at 6:07 am
Email ThisBlogThis!Share to TwitterShare to Facebook