A woman sent a text to her ex-partner threatening to smash his windows after being told he had sex with her son’s prostitute girlfriend. Carol Bulut, 56, appeared at Aberdeen Sheriff Court where she admitted sending a message that was offensive or of an indecent, obscene or menacing character.

The court heard that Bulut and her partner had been together for 23 years and had four children together. Defence agent Alex Burn explained the circumstances of the case. He said: “Her son received a phone call from his partner, who is a prostitute. The girlfriend says ‘I have just got £100 from a punter’ and that she is having a Chinese.” 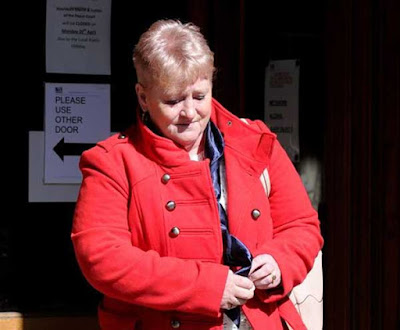 Mr Burn said at that point her son realised the phone being used belonged to his stepfather – and deduced that punter in question was his relative. The solicitor said the son then phoned Bulut and told her: “He (the stepfather) is having sex with my bird.” The solicitor went on to say that his client was furious and engaged in the mobile phone text message.

Mr Burn described it as a case of “hell hath no fury like a woman scorned”. Sheriff Alison Stirling admonished Bulut of Balmedie, for the offence. Speaking after her court appearance, an emotional Bulut said she was glad it was over and said what happened had a “detrimental effect on the family”.
Posted by arbroath at 6:00 am
Email ThisBlogThis!Share to TwitterShare to Facebook

Are they living in a world where whores have suddenly turned into Julia Roberts?

Why are these people allowed to reproduce?