A little dog made a grand entrance during the first half at the premier club rugby match between Coastal and Inglewood at the Okato Domain in New Zealand on Saturday. Having already been threatened with a pair of size 10 boots earlier in the game, the unnamed canine looked to have disappeared through the hedge and out of trouble as the match progressed.

He wasn't gone for long though. A few lineouts and a couple of scrums later the hound was back with a score of its own - a rabbit. Although his entrance caused much hilarity in the crowd, some of the players were less impressed, including Coastal midfielder Thomas Watt who took it upon himself to rid the rugby of the two pests. 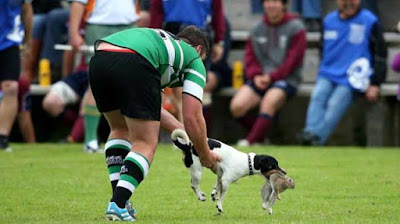 The cunning canine was not having none of that, however, as it gripped the furry fella tight between his teeth in defiance. Watt won the battle, though, getting the dog off the pitch but leaving the distressed rabbit on it. Then from out of the crowd came Taranaki flanker Berny Hall, a rural man who knew exactly how to remedy the situation.

With a quick turn of his wrists the rabbit was no more as it was tossed behind the grandstand. The battle might have been lost but the dog won the war, emerging five minutes later with the rabbit in its mouth before racing under a parked truck for a good feed. Inglewood won the match 29-28.
Posted by arbroath at 6:03 am
Email ThisBlogThis!Share to TwitterShare to Facebook

Quick turn of the wrists is a nice way to say he killed it.

Those 'real blokes' don't take kindly to other creatures living on the planet.
Every day I hate humans more.

I understand rabbits are not native to New Zealand and are considered pests and threat to the native wildlife.