A woman drove a school bus stolen in Stanwood, Washington, 70 miles to Blaine, where she rammed the bus into a police car and crashed again in a marina park on Friday. She then tried to swim to Canada while screaming, “God will save me!” according to police and witnesses. The short yellow school bus, with no students aboard, had been taken from the Stanwood-Camano Island School District’s bus barn at around 1:45p., according to the Snohomish County Sheriff’s Office. Snohomish County had asked the public to be on the lookout for a bus with Washington license plate 86934C. 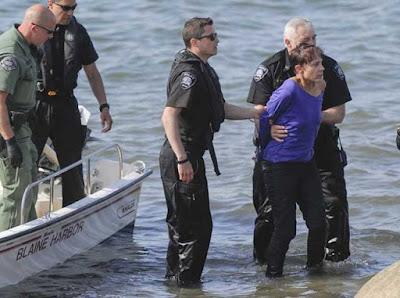 A short yellow bus was reported weaving north on Interstate 5 at around 3:45 p.m. in Ferndale, and within about a quarter-hour, a police officer spotted it in Blaine. The bus rammed the officer’s patrol car and went speeding down Marine Drive, a dead-end harbor road, said Blaine Police Chief Mike Haslip. Another driver, Katherine McCall, 72, of Blaine, said the bus passed her at 60 mph. “Boy, that school bus sure is driving fast,” McCall recalled thinking. “I hope there aren’t any kids aboard.” The bus crashed into a log parking-lot barrier, dragged the log, and came to a stop, high-centred, a few feet short of a tall solitary tree in the middle of the park, about 100 feet short of Boundary Bay. 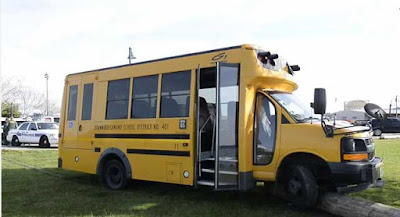 The bus theft suspect, a middle-aged woman, ran from the bus and shouted, “God will save me! God will save me!” as she waded into the shallow water on the north end of the park. Police jumped aboard the Blaine harbormaster’s powerboat and tried to convince the woman, who swam about 150 yards out, to surrender, Haslip said. She would not. After about 20 minutes, officers pulled the woman, showing signs of hypothermia, into the boat. She swam about half the distance from the park to the 49th parallel that marks Canadian waters, Haslip said. The water there is shallow: 3 to 6 feet deep in parts. North Whatcom firefighters took her by ambulance to St. Joseph hospital to treat her for hypothermia.

“She’s wet and very cold,” Haslip said. She’s expected to be evaluated for mental health issues, too. The woman gave officers a name, but police didn’t feel confident enough that she was telling the truth to release it, Haslip said. She's accused of vehicle theft, felony assault on an officer and felony eluding of law enforcement. By Friday night a woman facing those charges had been booked into Whatcom County Jail under the name Elizabeth Winter. She’s believed to be about 54 years old. No details have been released about a possible motive. Keys to the bus, No. 71, were still in the ignition while police examined the scene. All of the Stanwood-Camano school district’s drivers and personnel were accounted for, and officers were trying to figure out how the woman got the keys.
Posted by arbroath at 6:06 am
Email ThisBlogThis!Share to TwitterShare to Facebook