A boxer dog has had a miracle escape after swallowing a 21-inch riding crop whole. Ten-month-old Hugo was on the way for a walk near Haldon Forest in Devon when his owner noticed that he was being sick. Hugo was rushed to Vets4Pets in Newton Abbot and taken straight into surgery after it was discovered that he had swallowed the riding crop. However he has since made a miraculous recovery and is now back home with his family in Kingsteignton. 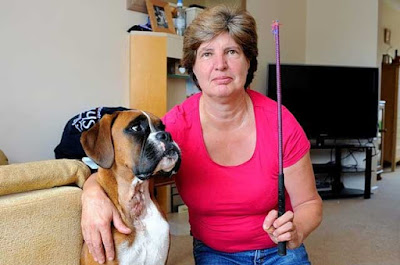 His owner said: "I was driving up to Haldon forest to take Hugo for a walk. I could hear and notice noises, and could see that Hugo was being sick and bringing up blood. He was frothing at the mouth so I took him straight to the vet. I was totally terrified and felt like a maniac. My daughter was completely hysterical. I didn't know what it was." Having been taken straight to the vets and examined, it was found that Hugo had a firm object in his stomach which turned out to be a 21 inch riding crop.

Chris Hawkins, partner at Vets4Pets, said: "It was a miracle escape and a once in a career event. We knew it was something long that he had swallowed but had no idea what we were dealing with. Hugo's mum knew the horse's tack box had also been in the car but what we found amazed us all. Hugo had swallowed an entire 21-inch riding crop. Hugo was taken straight to theatre where the crop was very carefully removed with gentle traction from an incision in his neck and gentle guidance from his abdomen via an abdominal incision simultaneously. 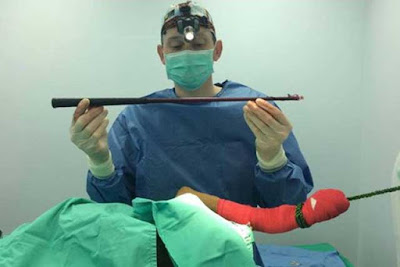 "It is just a miracle the crop had gone so far without penetrating any organs and causing damage. There were no chew marks on the crop as well – he had just swallowed it whole – but had he swallowed the other end first it would have been a different story. Hugo is a great dog and has bounced back, and was very pleased to return home two days later to continue his recovery with his loving family." Hugo's owner added: "He is getting better now, although very slowly. I am sleeping downstairs with him and he has to take tablets twice a day. He has some better days than others, but we are now very relieved that he is all right."
Posted by arbroath at 6:01 am
Email ThisBlogThis!Share to TwitterShare to Facebook