Man used mop to save little girl dangling from window

A Chinese man used quick thinking and a trusty old mop to save the life of a young girl who was dangling from a fourth-storey window. 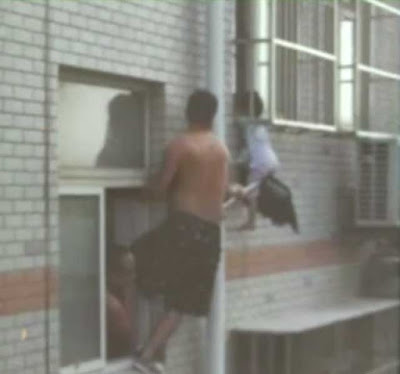 Wang Baocheng used the mop to support the young girl whose head was stuck between window bars outside her apartment in Weifang City, in the Shandong Province. "I saw the girl hanging from over there. Then I heard her calling for help and quickly ran over,” Mr Baocheng said. "I saw that the girl's head was stuck and it was holding her up. "When I got upstairs I grabbed onto the window and used a mop to support her." Mr Baocheng risked his own safety to perilously lean out of the window to support the young girl with the mop. As the girl was home along and the door to her apartment was locked, Mr Baocheng continued to hold her up until her parents returned home and pulled her inside.

A nearby resident who witnessed the incident praised Wang's actions. "Wang held the girl up for more than 10 minutes ... I think his brave and courageous actions are worthy of praise," the resident said. While the little girl suffered a terrible fright, she didn’t suffer any injuries thanks to Mr Baocheng’s quick thinking.
Posted by arbroath at 6:02 am
Email ThisBlogThis!Share to TwitterShare to Facebook

That girl is way to little to be left alone, even for a few minutes. The man is a true hero.