Asthmatic sea otter is learning to use inhaler

A wheezy sea otter in Seattle has been diagnosed with asthma and is receiving a breathing boost from an inhaler. The Seattle Aquarium in Washington said the sea otter Mishka started having trouble breathing when wildfires moved closer to the aquarium. 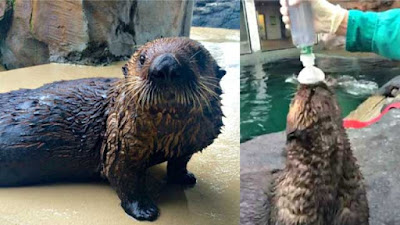 A veterinarian diagnosed Mishka with asthma after determining she was struggling to breathe by listening to her chest and taking her blood work. Now Mishka is learning to use an inhaler and responding well.

One-year-old Mishka is the first sea otter to have asthma, the aquarium has said, and is receiving the same medication given to humans. Aquarium biologist Sara Perry is using food to train Mishka to push her nose on the inhaler and then take a breath.

"We try to make it as fun as possible," she said. Mishka, who has been at the aquarium since January, is reportedly responding well. Washington sea otters became extinct in 1910 due to hunting and did not return to the state until the late 1960s when some otters were moved in from Alaska.
Posted by arbroath at 6:06 am
Email ThisBlogThis!Share to TwitterShare to Facebook