Instead of making flying sounds, a children's toy plane's sound effect was an Islamic prayer, according to the president of the Islamic Society of Whatcom County in Washington. It's an issue several customers have complained about. 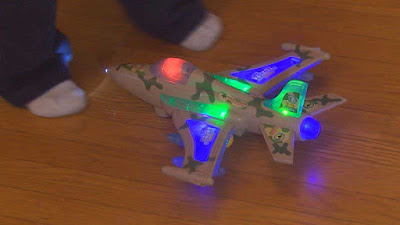 The toy was a Christmas present given to a Whatcom County 3-year-old. "We put the batteries in and didn't get what we expected," said Bjorn Thorpe, the boy's uncle. "I do respect other religions, but it's not the right situation to have it on a children's toy." 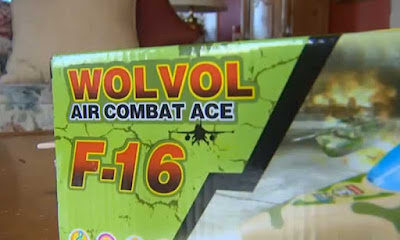 "This is a prayer you're supposed to say when you're performing Hajj," said Nadeem Israr, president of the Islamic Society of Whatcom County, who explained the sound is a prayer Muslims say during their pilgrimage to Mecca. The toy company, WolVol, blames its manufacturer.

They say the manufacturer must have mistakenly shipped them a bad batch of toys. It pointed to its nearly four-star rating on Amazon, where the family bought the toy. Thorpe expects a refund so they can get his nephew his new Christmas present. "He just wants a plane," Thorpe said.
Posted by arbroath at 6:04 am
Email ThisBlogThis!Share to TwitterShare to Facebook

Return the stupid toy and get something else. This isn't really news-worthy.

It is news-worthy, Anonymous, as it shows that unexpected ways of warfare can be expected from people who come and attack from the desert - but with personnel that was trained by our programming world.

You know, I kind of get tired of the "Oh this isn't newsworthy" attitude because they think it's not that big a deal, and yet someone is complaining about it. So therefore, people should just shut up if it doesn't affect everyone. Wow. The man is concerned, as I would be. This sounds like another way of indoctrinating us into their pathetic world. I don't want to be muslim, EVER.