A "refugee cat" that travelled on a crowded rubber boat with its family fleeing Iraq, only to run away scared on a Greek island, has been reunited with them four months later in Norway. Fluffy white male cat Kunkush's adventure spanning 2,000 miles began when it leapt out of the small basket on Lesbos after the family's journey from Islamic State-controlled Mosul in Iraq. 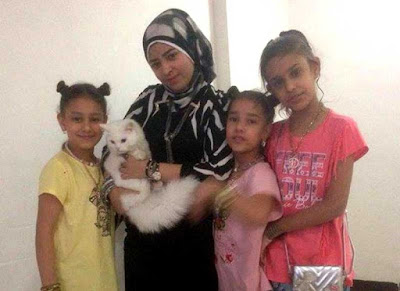 The cat's family, comprising a woman and her five children, searched for hours before being forced to move on to the next transit camp. Kunkush resurfaced three days later in a fishing village and, although its fur was now matted and grey, locals recognised it, labelling it "refugee cat" and volunteers set to work to reunite it with its family. The cat, who had fallen victim to some unfriendly local cats, was taken to a vet by Amy Shrodes and Ashley Anderson and renamed Dias (modern Greek for Zeus). 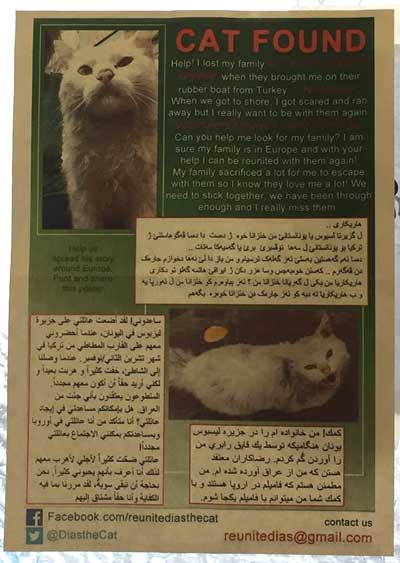 The pair arranged for a Facebook account to be set up to aid Kunkush's cause. "I know how much hope means to a person who has nothing else left," Ms Shrodes said. "I felt strongly that if this family took such a huge effort to bring him with them, they must consider him a part of their family. It wouldn't be right to not give them a chance to at least know he's OK, and even take him back if they're in a place where they can."

Kunkush obtained a pet passport and in January and Ms Shrodes flew with the cat to Berlin, where a social media user had volunteered to foster it while the search continued. About five weeks later, its family, now living in Norway, contacted the volunteers through the cat's Facebook page. They sent photos taken of Kunkush in Iraq. A reunion was first held over Skype, before Kunkush travelled to join its family in their new home in Steinkjer, giving its adventure a happy ending.
Posted by arbroath at 6:02 am
Email ThisBlogThis!Share to TwitterShare to Facebook

Who is chopping onions in my office? *sniffle*

A tiny, sparkling moment of love, peace and hope in a dark, grey sea of realistic despair.

I'm glad it got a happy ending.