Fat king penguins are unsteady on their feet while waddling compared to their slimmer counterparts, but carrying a bit of extra weight comes with an important advantage when it comes to reproduction, biomechanics researchers say. A research team led by Astrid Willener from the University of London’s department of life sciences travelled to the subantarctic region of Antarctica to research the king penguin, which can grow up to 1m tall and up to 16kg, making it the second largest species of penguin behind the emperor. Ten male king penguins who were in courtship and who weighed more than 12kg were captured near the shoreline at the edge of a colony. The penguins, which are serial monogamists, have the longest breeding cycle of all the penguin species - 14 to 16 months - and produce just one chick per cycle. Weight gain is essential in courtship so that the penguins have enough fat reserve to survive their fast while taking care of their eggs. 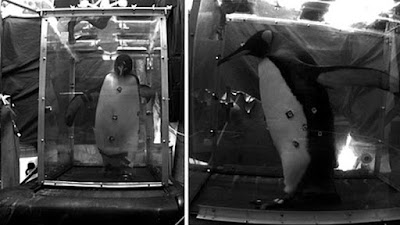 “However, being too fat make them less stable and thus easily spotted and eaten by predators,” Willener said. “So understanding the biomechanics of how penguins deal with walking with an additional quarter of their usual weight, while still being quiet stable, is very interesting.” The researchers kept the penguins for 14 days and fasted them during this time, and tested them for their ability to walk on a treadmill at a speed of 1.4km/h before and after their weight loss. Fasting for periods of up to one month is normal for king penguins, and the researchers checked the critical body mass of the birds to be sure that they were not losing body mass too fast. They also kept the penguins in a pen next to their colony during the study. However, there were difficulties in getting some of the penguins to cooperate, Willener said, with some of the larger individuals trying to cheat the system. “A good amount of the individuals were able to walk on a treadmill straight away,” she said. “Once the speed is set, the penguin usually can walk fluently. But an individual that is not able to walk straight away on a treadmill is difficult to train.

“Sometimes the penguins were lazy and ‘water-skied’ on the treadmill by leaning their back on the back wall of the treadmill. That is obviously not good for the data collection.” The penguins received two training sessions of 10 minutes to get used to walking on the treadmill. The posture (leaning and waddling) of the penguins while walking was then determined by the researchers. To quantify the waddling, the amplitude of peak left and right leaning was calculated. They found that although the penguins waddled with more agility at a lower weight, they had nonetheless adapted well to be able to handle waddling while heavier, even if they were not as efficient and less stable. “Waddling amplitude, leaning amplitude and leaning angle all remained fairly constant across the two body masses,” the study, published in the online science journal PLoS One, found. “However, some differences were uncovered; in particular there was good evidence that variability in the leaning angle and leaning amplitude, and some evidence that the waddling amplitude, were lower when the birds were lighter.

“These results indicate that heavier king penguins have a higher frontal and sagittal instability; they are less stable walkers than when they are lighter.” But with swimming the primary method of travel for the birds, being agile in the water was more important that a quick and graceful gait, Willener said. “The weight gain is an adaptive mechanism for them to survive their fast while reproducing and taking care of the egg,” she said. “But it is a trade-off between putting on weight to fast longer, in case there is a delay in finding a penguin partner to mate with, and still being able to walk, because if they can’t walk steady, they fall and will be spotted and eaten alive by predators. However, pedestrian locomotion is only their secondary locomotion mode.” Willener hopes the findings will help in efforts to better understand, and protect the species. While king penguin numbers are not threatened, they have been in the past. “The link between gait and energy expenditure can help to improve penguin protection,” she said. “The energy expended during their walk, particularly when stressed and responding to predators, may affect their ability to fast and protect their chicks.”
Posted by arbroath at 6:04 am
Email ThisBlogThis!Share to TwitterShare to Facebook

Well, science has been pushed forward and penguins have been mithered. I'm not sure what this newfound knowledge will get us, but without the space program we wouldn't have things ranging from teflon to pills that transmit pictures of the inside of your guts. I look forward to our new penguin-age technologies.