An amateur golfer who saw his wedding savings wiped out and has been left thousands of pounds in debt after losing a legal battle with his local club has said he will not play there again. Jake Warner was elated when he hit a hole in one at the 12th tee during a charity event at Haverhill Golf Club last June. The 24-year-old, of Haverhill, Suffolk, believed he had won the car that was on display next to the 12th tee - a brand new five door, 1.4TDi Vauxhall Corsa, worth £14,000. Immediately after scoring the hole in one Jake even posed for a picture next to the car, on which was written ‘Win This Car if you Get a Hole in One.’ 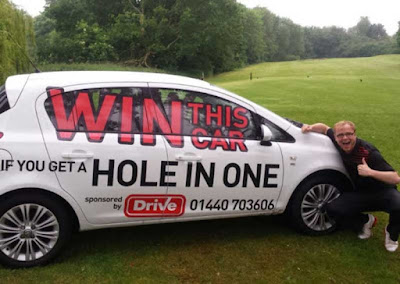 Mr Warner soon learnt that the club was not going to offer him the new Corsa that was displayed on the course and instead he was asked to accept another car, of lesser value, which he refused to do and instead ended up taking the club to court. On January 14, Mr Warner lost his case after a hearing at Cambridge County Court and now after all the legal costs and last minute settlements with the club have been taken into consideration he has been left £3,200 in debt. To cover for the debt and the loss of money he had saved for his wedding later this year he added £10,000 on to his mortgage.

Mr Warner said: “The next day after the event I went to the Vauxhall garage to see what the car was and he pointed out a car to me that was a completely different, three door, basic one litre car with no air conditioning, no alloys, just a completely different car.” Mr Warner said he was told that the golf club was only insured to offer a car up to the value of £8,000. “I approached the golf club and said ‘that’s not the same car’, “ added Mr Warner. “The car on the tee was worth £14,000 brand new. I really don’t want to look ungrateful but there’s a big difference here between what was on the tee and what you guys are offering.” No settlement could be reached and so the two sides went to court. Mr Warner was told by a solicitor he had a ‘very good case.’

However, at the end of the legal dispute Mr Warner was left counting the cost. Mr Warner said he lost the case due to a loophole in the law, adding: “Our argument was that the car was on the tee, written the way that it was. There’s no real hiding from that. We were forced to go to court. I was told I could not have had that car purely and simply because I didn’t see it before I started the round.” After seeking advice from their solicitor, Haverhill Golf Club issued a statement that said: “The club never disputed that Jake Warner had won a car and made a very generous offer to settle the matter which Jake chose to reject. The club behaved entirely properly throughout and were fully vindicated by the court’s decision to throw out the claim. The club very much regrets that Jake chose to pursue a claim that had no merit and was bound to fail. The Golf Club will not be making any further comment.”
Posted by arbroath at 6:01 am
Email ThisBlogThis!Share to TwitterShare to Facebook

"Mr Warner was told by a solicitor he had a ‘very good case.’"

It was a very good case. For the solicitor.

Sounds to me like he needed a better lawyer. Club management = doucehbags. And I'm not just talking about that particular golf course; it's endemic to all of them, on both sides of the pond.

Just another great reason to avoid golf and golf courses.

I think the poor guy got a rotten verdict. It says win THIS car.

I hope the Streisand Effect comes down on this golf course like hailstones on a souffle.

The golf club had a better relationship with the courts than the plaintiff.