A hapless cat stuck up in a tree with a crisp packet on his head had to be rescued on Friday morning. The RSPCA attended Thicket Lane, near Chichester, West Sussex, at around 10am after a resident called for help.

They were concerned that the cat would not be able to get down from the tree as he couldn’t see. Marie Stevens, RSPCA welfare officer, climbed around twelve foot up the tree to save the tabby, believed to be a feral, along with the help of two colleagues. 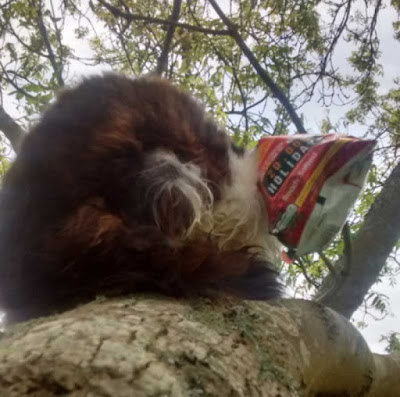 Inspector Stevens said: “I reached out to the cat and managed to quickly whip the crisp packet off of his head before he panicked and disappeared further up the tree. As soon as I pulled the packet off, the cat jumped from the branch to freedom and ran off”

Kirsty Watling and Shelly Cash, animal care assistants from the RSPCA’s local branch, Mount Noddy Animal Centre, helped AWO Stevens with the rescue to ensure she was safe. The cat didn’t seem to be injured by his experience.
Posted by arbroath at 6:02 am
Email ThisBlogThis!Share to TwitterShare to Facebook