Clown is contemplating his future after being robbed as he performed

A clown is contemplating his future after being robbed as he performed to families in Southend High Street in Essex. Salvo the Clown, a regular sight in the town centre, was entertaining shoppers when he was approached by a man and a woman. Salvo, who has asked not have his real name revealed , said he recognised the man as he had been verbally abused by him on several occasions previously. He added: “He came up to me and said ‘I’m going to take some of your money’.

“The lady who was with him dropped down to my case to take the money out. I tried to stop her by putting the lid down. The next thing I knew I was on the deck.” Salvo, from Thundersley, said he did not know how much money was taken. He sometimes earns as little as £5 a day. The clown said: “All I know is money went flying everywhere and I fell flat on bum. I had a bruise there this morning. It’s just sad that it’s happened. It really shook me up and upset me. I have been down the High Street since Spring bank holiday 1997. It’s my only source of income. 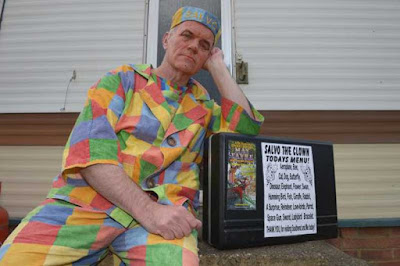 “I don’t earn a lot but it’s sufficient to keep me going. I’m a very well-known and well-liked person on the High Street and people wouldn’t want that to stop. It shook me up quite badly, I have not had a good night’s sleep thinking about it.” The clown first donned his famous colourful outfits in 1968, but he admits he is now scared of the future in case he is targeted again. He said: “Whether it’s going to become a regular occurrence or not I don’t know. I don’t want it to become a problem. I don’t want to give up the clown work because I do enjoy it. As long as I can make children happy I will continue to be on the High Street, providing I’m still alive.”

The incident happened outside McDonalds. A witness, who asked not to be named, said the thugs had a Staffordshire bull terrier with them, and could be heard shouting at Salvo. She said: “The woman pushed him to the ground and was shouting about something. He’s been there forever, it’s a real shame. He was quite shaken up. He said his arm was hurting and I just felt really sorry for the guy.” She described the pair as being white and aged in their forties. An Essex Police spokesman said: “Police were called to Southend High Street following reports that a clown working as a street entertainer had been assaulted. It is alleged that a woman tried to steal money from his collection plate before pushing him over.” Anyone with information can contact Essex Police.
Posted by arbroath at 6:03 am
Email ThisBlogThis!Share to TwitterShare to Facebook