A man was suprised when he opened the glove box of his courtesy car and found the packaging for a sex toy. Jamie Randle, aged 23, had taken his Vauxhall Insignia back to the car dealership Availablecar.com after his windscreen wipers had snapped and was given a courtesy car while repairs were carried out. But when he reached into the Astra's glove box as he pulled up outside his house he found the box for a sex toy.

Jamie, from Sheffield, south Yorkshire, said he worried about how to explain the strange find to his girlfriend Sarah Watson, 25, in case she thought he was cheating. "I just couldn't believe it, I was in utter shock - a sex toy box - in a rent-a-car," he said. Jamie was talking to his girlfriend Sarah on his phone while he parked on their drive when he spotted the sex toy box. "I drove back home and was parked up and Sarah was just talking to me on Bluetooth when I found it," said Jamie. "I didn't dare tell her at the time that I found it. I then had the humiliating task of having to sit her down and explain to her exactly what I was doing with the box. 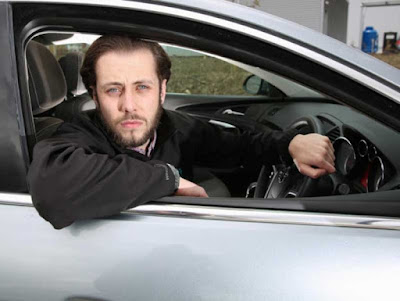 "If I had taken it back into our house Sarah might have thought I was up to something bad so I just kept it in the car. For those two days I felt as though I couldn't have any work colleagues or friends in my car because I had that thing in the glove box. But when I took it back to Availablecar.com they made it out to be my problem." Jamie, who has his own theories on how the sex toy box ended up in the car, said: "Someone has obviously got it out in the car because otherwise they would have taken it into the house in its packaging surely."

Jamie fears the car had not been given an official valet clean before he was given it. Jamie added: "I think that although the company are saying they valet every car, whoever had the car before me must have had the sex toy in there because it hadn't been cleaned out. It would have made for awkward teaching if my 11-year-old brother would have got the packet out." Sarah, 25, said: "I do find it hilarious. I thought he was lying though at first - and I was obviously so disgusted and shocked by it. Jamie sat me down and I just thought: 'Oh my god, what is he going to say'." Sarah, who has been with Jamie for almost two years, added: "Could you imagine having to sit in that car knowing what could have gone on in there? - I didn't dare get in it."
Posted by arbroath at 6:03 am
Email ThisBlogThis!Share to TwitterShare to Facebook

Crap's sake. Just take the thing to the trash bin and dump it. No need to make a story about it.

One thing I am curious about: How do you get your windscreen wipers snapped? Been driving since about 1970 and can't see how this can happen unless someone deliberately does it. Or does windscreen not equal windshield?

Lurker, agree with you 100%. The first thing I thought was the guy could have found a to public trash bin to put it in. This guy isn't familiar with common sense.

Of course, maybe the guy is setting up an excuse for when his girlfriend _does_ find something, um, incriminating ...