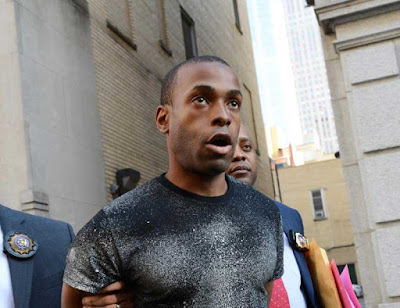 But on Thursday afternoon, police said Himmelstein jumped into a picture 22-year-old Canadian tourist Sophie Violene Dauvois was taking, hugged her and then demanded $5. Police said he then attacked her when she wouldn’t hand over the cash, punching her in the face. Himmelstein ran off but the victim took a photo as evidence and showed it to police, who found him in the area. 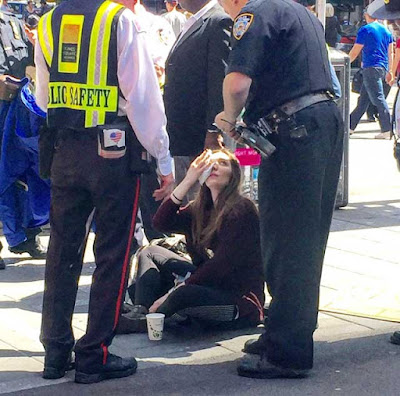 He faces charges of attempted robbery and fraudulent accosting. The woman was taken to Mount Sinai West Hospital and was treated for an injury to her eye as well as cuts and bruises. Investigators say it’s not the first time he’s pulled this stunt. “He is no stranger to this,” said NYPD Chief of Department James o’Neill. “He has multiple prior arrests and several were for the same type of offence.”

The incident comes as city officials are working to get a better handle on the costumed characters and others looking for tips in Times Square, some of whom have allegedly harassed and even hurt unassuming tourists. Last month, the City Council approved the creation of a specific zone for the tip seekers, but after Thursday’s confrontation, some believe even more measures need to be taken. “Something needs to be done,” said tourist Jennifer Manos. “There needs to be an extra layer of protection or something.”
Posted by arbroath at 6:07 am
Email ThisBlogThis!Share to TwitterShare to Facebook

The idea that people allowed themselves to be hugged by a complete stranger is somewhat stupid. A moron like this guy is going to expect everyone to do the same thing. This woman was attacked because society is full of dumb arses. I don't care what his situation in life is, not my problem, but stop giving into these creeps and things like this might not happen. I hope she is okay and I also hope she presses charges against him. Don't feel sorry for people like him, because he will be expecting you to feel sorry for him. Put him in jail for a couple of months. That should teach him.

Gee. I thought "huggermugger" was an adjective, not a noun. :(

Sorry I'm all outta free hugs. Have a complimentary punch in the face instead.

Since when do "free hugs" require remuneration?