A police force has apologised after its officers made a sandcastle "crime scene" featuring a naked dead woman. The sculpture, depicting a sprawled murder victim surrounded by police tape, was crowned winner of the Cornwall Beach Games sandcastle competition. 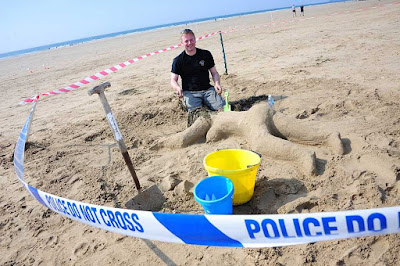 But Devon and Cornwall Police was criticised after boasting officers tweeted about their victory. The force said it was a "fun event" and officers had not intended to cause any offence. Local councillor Hannah Toms said some would find it "very offensive".

Ms Toms acknowledged officers had intended to be "light-hearted" but said the sandcastle "somewhat misses the mark and is in a bit of poor taste". "I like a joke as much as the next person but this is a family beach event," she said. "As a parent I would not be very happy to explain to my child what it was all about. It's trivialising quite a serious matter." 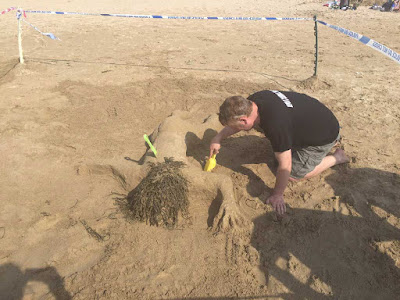 Ms Toms added: "I think there's a level of sexual stereotyping with the large bottom and the large breasts. Police have been working really hard to break down barriers on reporting sex crimes and I don't think this image really helps their cause." A spokesman for Devon and Cornwall Police said: "If any offence has been cause by the nature of the sculpture, this was never intended and we apologise for that."
Posted by arbroath at 6:01 am
Email ThisBlogThis!Share to TwitterShare to Facebook