A bus depot worker has appealed for someone to give a new home to a dog abandoned on a London bus. The Staffordshire Bull Terrier cross was found sitting alone by the driver of the 158 to Stratford on Thursday night. 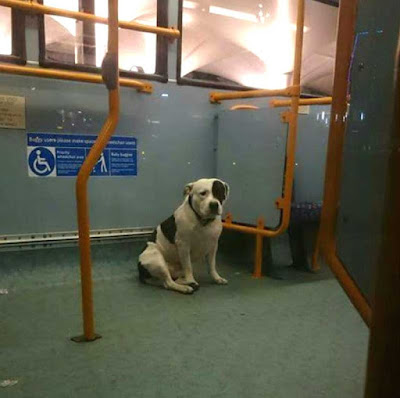 The bus was taken out of service to the Stagecoach garage in West Ham, but the dog refused to get off. Staff fed and kept him warm until he could be collected by Newham Council's animal welfare team on Friday morning.

Bus depot worker Ricky Hatton said: "When I arrived at around 6.30am he'd been there all night. Very scared, but not aggressive. I gave him food, water and my bodywarmer. I nicknamed him Bus-ter. (He) seemed in shock. I'm hoping he's found a new loving home." 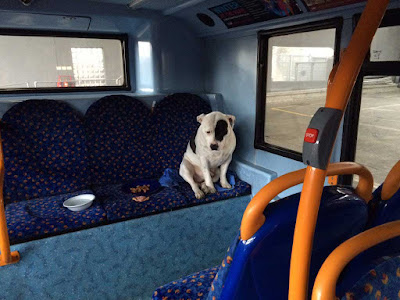 Bus driver Amos Paul Mak said that he wanted to take the dog home but it was against regulations "in case he bites". A Newham Council spokesperson said: "This dog is currently being looked after by our animal welfare team while we try to locate its owner. If anyone recognises this dog, please contact us."
Posted by arbroath at 6:03 am
Email ThisBlogThis!Share to TwitterShare to Facebook

Yeah, all good, but that 'against the rules in case he bites' bit is indicative of the powder puff world we now inhabit.
The dog has feelings, would have much preferred to have been taken into a warm, friendly house.
Treat dogs, all of them, as you would a child.

Oh! Tears! Poor baby. Please share with us if there's a happy update!