Karen Richardson from Victor, Idaho, was one of several parents chaperoning a group of students on a field trip to Yellowstone National Park, Wyoming, last week.

Richardson says as the students were being taught at Lamar Buffalo Ranch, a father and son pulled up at the ranger station with a bison calf in their SUV. “They were demanding to speak with a ranger,” Richardson said. “They were seriously worried that the calf was freezing and dying.” 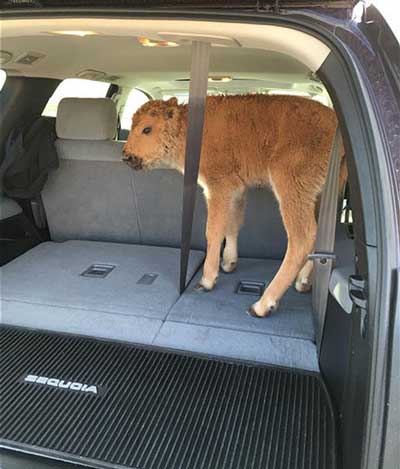 Rob Heusevelet, a father of a student, told the men to remove the bison from their car and warned they could be in trouble for having the animal. “They didn’t care,” Heusevelet says. “They sincerely thought they were doing a service and helping that calf by trying to save it from the cold.”

Law enforcement rangers were called and the father-and-son tourists, who were from another country, were ticketed. Heusevelet says the rangers followed the pair back to where they had picked up the bison, and the animal was released. Yellowstone visitors are not allowed to approach wildlife and are to stay at least 25 yards away from large animals.
Posted by arbroath at 6:05 am
Email ThisBlogThis!Share to TwitterShare to Facebook

Update: the calf is dead. Morons.

"The bison calf was later euthanized because it was abandoned and causing a dangerous situation by continually approaching people and cars along the roadway."

Thanks for the update, Emma.

Wow, the poor animal. Some humans are very stupid. sad.

I also read that he was euthanized because the herd rejected him. I hope that's the real reason.