A motivational trainer in China spanked eight rural bank employees with a stick, shaved the heads of the men and cut the hair of the women after they performed poorly on a training weekend. “Spanking was a training model I have been exploring for many years,” the trainer, Jiang Yang, said, absolving the bank’s leadership of direct responsibility. 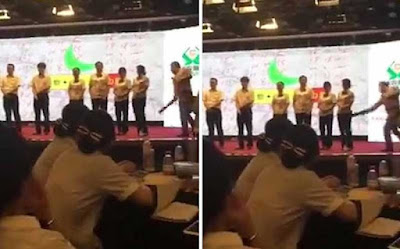 Changzhi Zhangze Rural Commercial Bank, a lender in northern Shanxi province, hired a Shanghai-based training company to run a “performance breakthrough” course. After a day of training last weekend for a staff of more than 200, Jiang demanded explanations from the eight employees with the lowest scores.

One responded: “I’m not hard on myself.” Another shouted: “I didn’t make a breakthrough”, while a third blamed lack of teamwork. Jiang then asked them to prepare to be beaten and strode up and down the row of offenders several times, spanking them hard with a stick. Later, he cut the women’s hair and shaved the men’s heads. The punishment, was captured by a mobile phone.

The training company declined requests for comment, while telephone calls to the bank went unanswered and Jiang’s mobile phone appeared to have been switched off. In a statement on Monday, a banking oversight body described the training as “improper”, adding that it had suspended the bank’s chairman and a deputy governor and told Jiang to make a public apology.
Posted by arbroath at 6:05 am
Email ThisBlogThis!Share to TwitterShare to Facebook

I bet that lifted company morale.

some people pay good money to get spanked