A firm in Geneva, Switzerland, plans to open a café where customers can enjoy oral sex while they sip their morning coffee. However, not everyone is happy with the idea. The idea for the café has been brewing for several months, Bradley Charvet of the Geneva firm Facegirl said.

Modelled on similar establishments in Thailand, the proposed Geneva café would add a new dimension to the sex trade in the city of the protestant reformer Calvin. The business model would see men ordering a coffee and using an iPad to select a prostitute they want to perform oral sex on them. They would then sit at the bar. “In five or ten minutes, it’s all over,” Charvet explained. 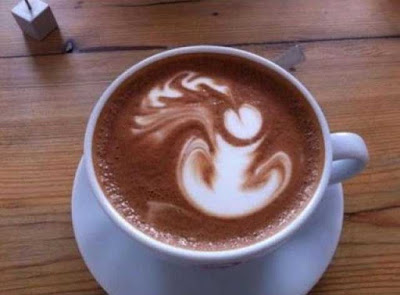 At 60 Swiss francs (€55, £45, $60), with a possible five-franc surplus for a latte macchiato the ‘coffee’ would be the most expensive in Geneva. It would, however, in theory at least, be perfectly within the bounds of the law. Prostitution is legal in Switzerland although it is strictly controlled, with sex trade workers required to have valid permits as part of a bid to fight people trafficking.

In cases where two or more prostitutes operate out of the same premises, the establishment has to be registered as a massage parlour. In 2015, 33 of these parlours were shut down in Geneva for not following the rules. Geneva’s Department for Security and the Economy are now looking at the café plans. Not everyone is happy with the idea though. Grégoire Théry of France’s anti-prostitution group Mouvement du Nid says the idea for a café serving up oral sex would only benefit the men behind the business. The business idea would, in effect, legalise pimping, he said.
Posted by arbroath at 6:02 am
Email ThisBlogThis!Share to TwitterShare to Facebook