Fears that someone could be killed because of large puddle

A retired construction worker fears that someone could be killed as pedestrians are forced to walk along a busy road in Ardrossan, North Ayrshire, Scotland, to avoid a puddle which is thought to be caused by recent development works. Alex Logan, who lives in Ardrossan, says that the large puddle at the junction of Montgomerie Street and Glasgow Street has been caused by recent construction works, which he believes have been carried out poorly. 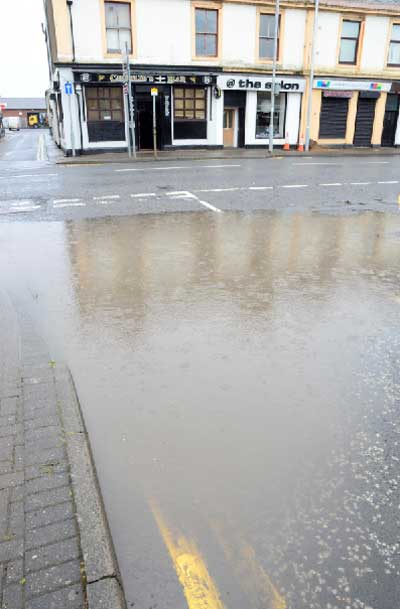 He said: “It’s a main road and people are having to step on to it because of all the water. The entrance to Montgomerie Street is all flooded. Someone’s going to get killed. The guys putting in the lamposts clearly don’t have a clue what they’re doing. When they put in the lamposts in, they swept the concrete into the drain and it’s all solidified so when it rains the water can’t get away. I’ve worked in construction all my days and I can see that they’ve made a real mess of it.”

Alex claims that the puddle has been a main topic of conversation in his local pub Charlie’s Bar, which is situated directly across from the flooded junction. One Charlie’s Bar customer, known as James, said: “People can’t cross without stepping onto the road so if there are cars coming, then that’s a health and safety issue. It’s really dangerous. I’m concerned about people with wheelchairs, walking sticks and walkers. 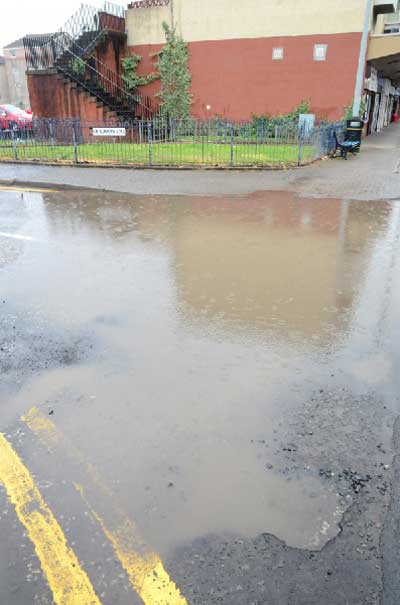 “They’ve got to go on to the road to get by this huge puddle but if a car comes then they won’t be fast enough to move out the way.” A spokesperson for North Ayrshire Council said: “The council are taking the necessary steps to address the issue with water and have also instructed the contractor to address any spoil which may have entered the drainage system. We will monitor this to determine if additional actions are required.”
Posted by arbroath at 6:01 am
Email ThisBlogThis!Share to TwitterShare to Facebook