Man with a van arrested for making a noise

A 47-year-old man was arrested in Queens, New York, over the weekend for oufitting his van with dozens of speakers and leaving the doors open while playing "exorbitantly loud" music.

Nelson Hidalgo allegedly plastered the back of his van with about 80 different speakers ranging in size and swung the doors open, blasting out music on Saturday night. 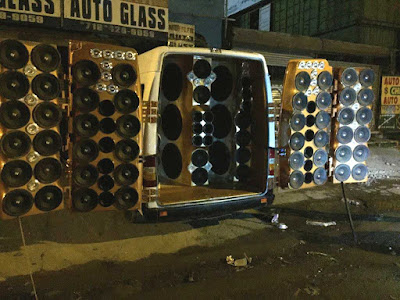 “I know it’s illegal, but it’s the weekend.” Hidalgo, who has no prior arrests, was charged with second-degree criminal nuisance, general noise prohibition, disorderly conduct, and obstructing the driver’s view. He was released without bail and told to return to court on August 1.
Posted by arbroath at 6:07 am
Email ThisBlogThis!Share to TwitterShare to Facebook