Jasper County sheriff's deputies arrested a couple reported to be riding naked on Tuesday morning near Joplin, Missouri, on what proved to be a stolen lawn mower.

“We received a call that there were two individuals driving down the road on a lawnmower naked,” said Jasper County Detective Tim Williams. Deputies responded at 8:42am to a home with a riding mower parked in the front yard. 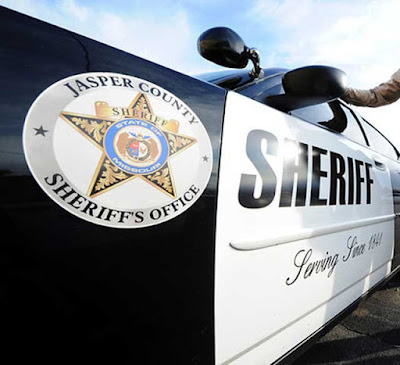 Detective Williams said 55-year-old Larry Webster and 40-year-old Tanya Hopper, admitted that they rode the lawn mower home naked after their clothes were stolen while they were skinny dipping in a creek.

Williams said further investigation determined that the lawn mower did not belong to either of them, and they were arrested on suspicion of felony stealing and indecent exposure.
Posted by arbroath at 6:06 am
Email ThisBlogThis!Share to TwitterShare to Facebook