A rogue swan is wreaking havoc at a Suffolk lake, sinking boats who dare to share his water. For decades the model boating club at Needham Lake coexisted peacefully with the local wildlife, but the arrival of the aggressive male swan has seen that relationship take a turn for the worse. One younger model boater has even written to the Queen in frustration, demanding that the menacing swan is brought in line. No fewer than eight intricately built model boats have been “annihilated” by the bird in a few weeks, leaving model boat enthusiasts scared to put their boats in the water. “He is a menace on the lake,” said Gipping Valley Model Boat Club treasurer, Cliff Galsworthy. He attacked my boat nearly straight after I put it in. I have spent about 10 full days trying to repair it. “It took about six months to build and he just smashed it to pieces a few weeks ago. 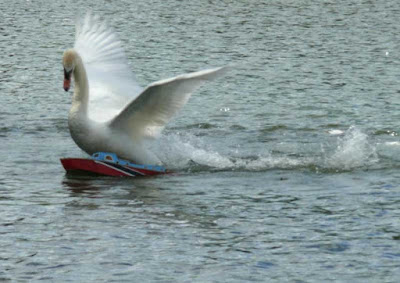 “I have fixed most of the superstructure but I still need to do the wiring.” The swan, who now has an unprintable nickname among boat club members, has a particular hatred of sailing boats but still lists some of the faster motor-powered ships among his victims. “He just smashes at them with his wings,” added Mr Galsworthy. “He annihilates them, tries to get on top and sink them. If you sail within 30-50 yards of him he will attack. He even attacks when his cygnets are nowhere near the boats.” The bird is part of a pair who currently have four cygnets – but the boat club has shared the lake with swans during breeding season many times before without a single incidence of bird-on-boat violence. Attendances at the club have fallen by half as a result of the attacks, with boaters afraid to put their pride and joy out to water if the bird is in sight. 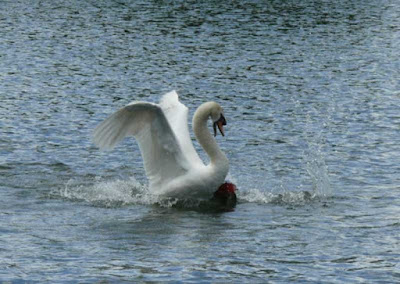 Some of the larger boats are worth up to £15,000, with many the result of months and even years of build work. One of the swan’s rampages was caught on camera by model boat club member Peter Ashford. He described how it reared up over the boat, leaving the owner powerless to steer away. “He smashed it with his wings over and over again,” said Mr Ashford. “It was like the Bismarck, the rudder got stuck and it kept going in circles around the swan, which made things worse. We would never go near the swans but this one seems to come after them. It pushed it under and it eventually sunk. Luckily there was a flotation aid in the end, which kept it just above the water. A couple of boats nudged it back to shore and we fished it out with a long pole.” One model boat club member who had two of his boats attacked has taken to writing to the Queen in a bid to get the “menace” moved on. 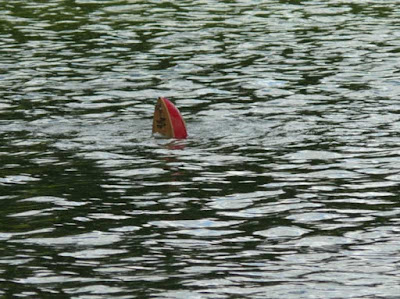 Dean Cable, 23, from Wickham Skeith, said he is afraid to put his boats in the water if the swan is about. He said: “I wrote to the Queen telling her the swan is a menace and I would like him to be moved on if possible. I said usually I like swans, but this one was attacking our boats and I would like to be able to boat in peace. I told her the geese have no problem with us, the ducks seem to enjoy it and the swans we used to have at the lake were not a problem. One duck even hopped onto a barge for a ride. It is just this swan that is a problem and I want to see him moved elsewhere. I had one of my boats valued a month ago and I can tell you I don’t want that swan in the water at the same time as my boat.” The swans at Needham Lake are Mute Swans, and many people believe these are owned by the Queen. However, the only swans now owned by Her Majesty are those on the Thames and associated waterways. The bird is protected from attacks under law, making it a criminal offence to harm swans. They are native to the British Isles.
Posted by arbroath at 6:00 am
Email ThisBlogThis!Share to TwitterShare to Facebook