Greater Manchester Police reported that an 86-year-old woman fought off a would-be thief with a packet of bacon in a supermarket. 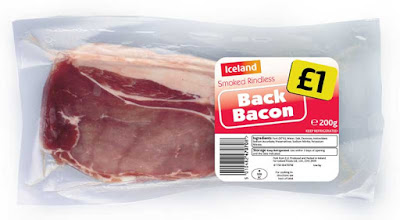 The woman had withdrawn her pension from a bank in Altrincham, Greater Manchester, on Monday before heading into an Iceland store.

While shopping she was approached by a woman who grabbed her trolley and demanded her money.

Police said the shopper "defended herself by repeatedly hitting the female offender over the head with a packet of bacon" in a Facebook post. However, CCTV footage suggests the police report was slightly more dramatic than the actual incident.
Posted by arbroath at 6:00 am
Email ThisBlogThis!Share to TwitterShare to Facebook