A Florida man and his girlfriend allegedly beat up his grandmother after she refused to drive them somewhere so that they could have sex, police said.

Michael Rubio, 25, and Jacquelyn Carrasquillo, 27, were arrested in Miami on Thursday on charges of battery to a person 65 or older. 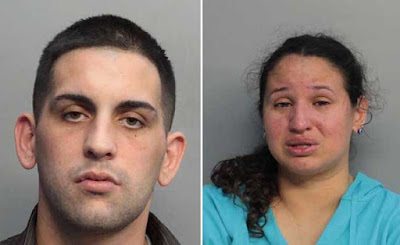 According to Miami-Dade police reports, Rubio and Carrasquillo were arguing with the woman because she wouldn't take them to a home for sex. Instead, she stopped her car and got out to walk home.

Police said the couple got out of the car and hit her multiple times, causing lacerations on her face and throwing her to the ground. The woman ran towards her home, and the couple drove away, the report said. Rubio and Carrasquillo were later arrested and taken to the Turner Guilford Knight Correctional Center. Police didn't say whether they ever had sex.
Posted by arbroath at 6:02 am
Email ThisBlogThis!Share to TwitterShare to Facebook