A couple were arrested on Tuesday after they tried to pawn items at a pawn shop in Clarksville, Tennessee, that belonged to the pawn shop owner.

According to a report from Clarksville Police, Jeremy Allen Watts, 30, and Jessica Faye Heady, 24, visited the Cash America Pawn shop with several items to pawn. 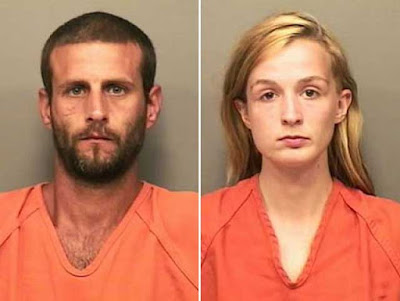 The pawn shop owner and victim, Edward Dial, recognised the items and went home. There, he noticed that someone had broken into his residence and taken several items.

Watts and Heady had tried to pawn two PlayStation video game systems, controllers, video games and DVDs. The property was valued at more than $1,000. Watts, of Nunnelly, Tennessee, and Heady, of Bellevue, were charged with aggravated burglary. Both were held on $50,000 bond.
Posted by arbroath at 6:06 am
Email ThisBlogThis!Share to TwitterShare to Facebook