Police in Ohio, responding to a call of an argument on Thursday morning found the source to be a man in a mask, up a tree.

Mount Vernon Police reports indicate that police were dispatched on a call of two men arguing at 8:45am. 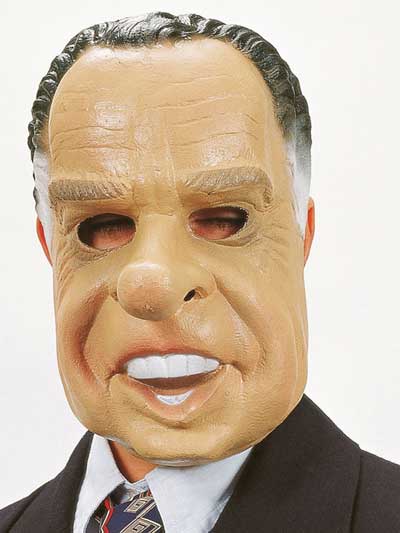 The caller said they could hear the argument but could not locate where it was coming from. Upon arrival, officers found a Mount Vernon man in a pine tree.

He was shouting and wearing a Richard M. Nixon mask. The 53-year-old man voluntarily came down out of the tree. No citations were issued in the incident.
Posted by arbroath at 6:05 am
Email ThisBlogThis!Share to TwitterShare to Facebook

Ha! My hometown! It was only a matter of time before we turned up on the obscure Scottish blog I've been visiting almost daily these last few years. Nice.
At least it's only a dude in a Nixon mask and not another double or triple homicide. We've had a few of those make headlines lately.

I realy hope he was screaming "I am not a crook"

I'm delighted to have eventually mentioned your hometown, Jeff! :)

He was sitting in the crook of the tree...police have released audio recordings of the episode, but portions of the conversation have somehow been erased.