Calls have been made for a clampdown on nude bathers at a popular family beach at Anglesey, north-west Wales. This follows a man being spotted sunbathing naked at Llanddwyn, near Newborough, on Saturday. Now Natural Resources Wales, who are largely responsible for the “family beach”, are being asked to take action to better control the area following the “upsetting” incident.

Bro Aberffraw Cllr Ann Griffith said: “I have contacted Natural Resources Wales to ask them what they intend to do to police the situation and how they are going to get the message out that this is not a recognised nudist beach. This is a beach enjoyed by families and nudity like this is not what one expects. It can be upsetting and some find it offensive and needs to be nipped in the bud.” But Graham Williams, Newborough reserve manager for Natural Resources Wales said nudism is already “actively deterred” on the beach. 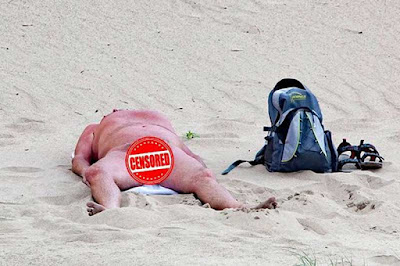 He said: “The beaches at Newborough and Llanddwyn are one of many sites we manage across Wales where people can enjoy the beauty of our natural environment. I stress this is not an official naturist beach but one for families to enjoy. We receive numerous complaints from beach users each year. We try to actively deter nudism by patrolling the site and informing nudists of the impact their behaviour could have on others. We have discussed this issue with Community Councils and other stakeholders, nudism is not encouraged on the beaches here.”

Natural Resources Wales added that although it is not an offence to be naked “it becomes an offence if people become offended by this activity.” According to the Crown Prosecution Service, naturists shouldn’t be prosecuted unless they are involved in an offence other than public nudity. Andrew Welch from British Naturism said nudity does not need to be limited to ‘designated’ beaches. He said: “Anyone who does even the smallest amount of research will know that naturism is a family activity. The fact that the beach is used by families makes it perfect for naturism.”
Posted by arbroath at 6:02 am
Email ThisBlogThis!Share to TwitterShare to Facebook