A man who placed two portable toilets along a retired physician's driveway in Williamsburg, Massachusetts, as "decorations" may keep them there, the Board of Health unanimously ruled on Monday after health agent Valerie Bird asserted that a "porta-potty" is not a "privy" under state law, and therefore exempt from town regulation. It's the latest chapter in a history of conflict between Chris Duval of Hyde Hill Road and local residents, including Dr. Henrietta Wallace, his closest neighbour. 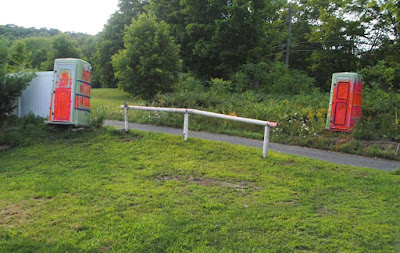 Several months ago, Duval placed the toilets along Wallace's driveway, which crosses his property via an easement. "This is not a privy," Bird said at Monday afternoon's meeting. "It is a sani-can or chemical toilet ... you see them at construction sites ... we have no bylaw, and nobody regulates chemical toilets." A privy is the same thing as an outhouse, said Bird. Resident Jennifer Dohrman noted that Bird was using a different legal analysis than she had before. Bird had previously said the structures are exempt from oversight because they are "decorations" and not functioning toilets. 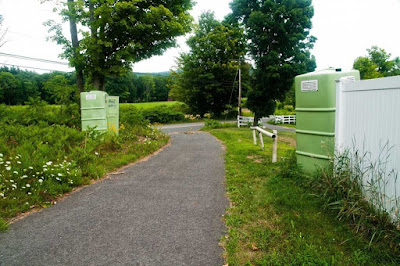 Resident Keith Harmon Snow, who has long been at odds with Duval over various issues, told the board they were being inconsistent. "You had no problem regulating chemical toilets when they were on my property," he said. Robert Parker, a resident and employee of Duval's, said that Snow's prior outdoor toilet was an outhouse, and not a chemical toilet. "It was a permanent structure with a pit in the ground," Parker said. Parker noted that Snow has long had a parked dead farm vehicle painted as a "decoration," which has not been regulated as an abandoned car. 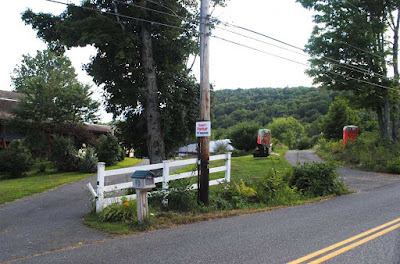 According to Department of Environmental Protection regulations, a "privy" is defined as "a structure used for the disposal of human wastes without water transport consisting of a shelter built over an unlined pit or vault in the ground into which waste is deposited." The state law further says "no privy or chemical toilet shall be constructed or continued in use; provided that the board of health may approve in writing the construction or continued use of any privy or chemical toilet which it determines will not (a) endanger the health of any person; or (b) cause objectionable odours or other undue annoyance." Duval's neighbours have expressed disappointment at the decision.
Posted by arbroath at 6:04 am
Email ThisBlogThis!Share to TwitterShare to Facebook