A man who lives as a vampire has said he ‘just wants to be treated like everyone else’. Darkness Vlad Tepes, who lives in Blackburn, Lancashire, says he has been living as a vampire for 13 years, sleeps in a custom made-to-measure coffin. He says he had also drinks cow and pig’s blood, as well as a human blood substitute. Darkness said until recently he had very few problems from other people. However this changed when he went for a drink with friends at a pub in Oswaldtwistle, Lancashire, where he said he was openly abused because of the way he dressed. 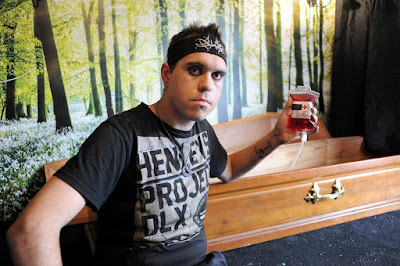 25-year-old Darkness, who changed his name by deed poll, said: “I went into the pub with two mates and a lad piped up and asked if I was abused as a child when I was young because of the way I look. I felt so ashamed and embarrassed that I would get asked such a personal question based on my choice of lifestyle. Everyone has their beliefs and I don’t believe I should be persecuted for following mine. I might be a vampire but I just want to be treated like everyone else. People have got to accept the fact that what’s normal to them is not normal to us, and what’s normal to us is not normal to them.”

Darkness said he first became attracted to the vampire lifestyle as a teenager. As part of his beliefs, he sleeps in a custom made-to-measure coffin that weighs 25 kilos is roughly 6ft 7in long. He is 6ft 6ins tall. He also has a strict balanced diet which stays away from fatty foods, and drinks cow’s and pig’s blood, as well as a human blood substitute. He said: “My life was always a secret until I came out two years ago. I first learnt about vampires when I was 13 and growing up in Galway, Ireland. I was taking my dog for a walk through the woodlands and I saw a group of girls dressed up and I thought they were zombies. 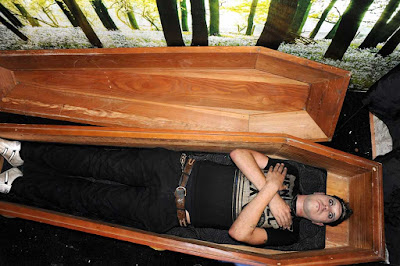 “I ran home because I was scared at first, but then I became really curious. One day I found them again, and they initiated me into their coven, and I have been a vampire ever since. To be a vampire is to believe that I have a living body but a dead soul. But I think there’s a lot of preconceptions about being a vampire from films and books like Twilight or Dracula. Garlic doesn’t affect me and I can quite happily walk around in the sunlight. The coffin is purely a choice option to being a vampire, it’s one that I do because it feels right.” Darkness has lived in Blackburn since 2012, and said he was high up in an East Lancashire coven of vampires called Underworld. He added: “Being a vampire is difficult and of course there are struggles in everyday life. But I’m happy to stand by my choice.”
Posted by arbroath at 6:00 am
Email ThisBlogThis!Share to TwitterShare to Facebook

okay...end of the line for political correctness.

Well, Shak, I guess we all need to attend Vampire Sensitivity Training.

I'll hire a value if they're available to work mornings.

Let's see if I have this right... "Man" acts like idiot, gets called idiot, cries. Another special fucking snowflake...christ, this shit is getting real tired. Someone should take him to a therapist and get him some help. Indulging this stupidity isn't the answer.