Bemused customs officials in Austria have stopped a Moroccan woman, who travelled to Graz airport with a bag containing her husband's entrails.

The man's intestines had been wrapped carefully in two containers. The woman, who has not been named, explained that she suspected her deceased husband had been poisoned. 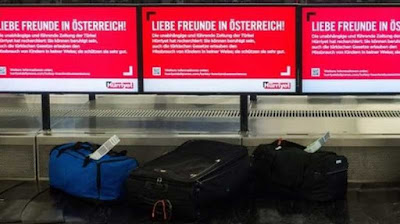 She wanted a toxicology test carried out on her husband's tissue. He died during an operation in Morocco. When the woman arrived in Graz, a doctor was called to examine the intestines.

He said a proper investigation could not be carried out without the whole body. Police said the woman had not broken any laws. The entrails have been stored temporarily ahead of further forensic investigation.
Posted by arbroath at 6:02 am
Email ThisBlogThis!Share to TwitterShare to Facebook

If the pathologist required the whole body, given the 25Kg limit on hold luggage, I guess she's going to have to make multiple trips.